I'm reading with curator and poet
Thomas Devaney
and Samuel R. Delany,
Tara Middleton,
and Cynthia Dewi Oka
at The Brooklyn Rail tomorrow.
In the spirit of the theme,
l will probably share
"The Burnt Lands"
(essay and poem)
from
Wite Out: Love and Work.
Register here,
and watch a stunning array
of earlier readings in this series
(including this one curated by Jorie Graham, featuring Claudia Rankine, Forrest Gander,
Victoria Chang, Victoria Chang, D. A. Powell,
and Jericho Brown)
here. 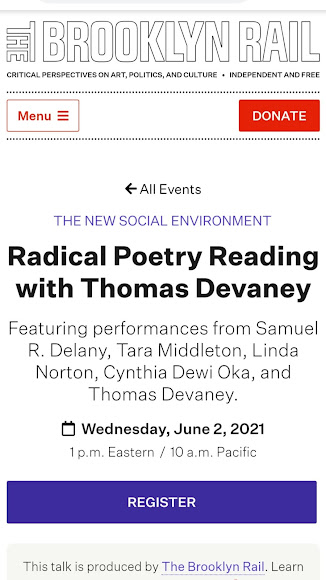 Update Feb 25th, 2021: PPOW Gallery has posted the video of this event on Vimeo. This December 10, 2020 reading with John Keene and Eileen Myles was a kind of belated book party for the publication of Wite Out: Love and Work, a reprise of the 2011 book party at PPOW for Wite Out's prequel, The Public Gardens: Poems and History.

At this event on December 10, 2020, John and Eileen read their own work (Eileen's most recent publication is For Now; John's new book of poems is due out soon). They also read some selections from Wite Out. They chose excerpts from my book that are too private for me to read aloud in public, and it was moving to hear those poems/passages in their voices.

I think we were all surprised at how warm and interesting the evening turned out to be. (Of course it would have been a different kind of event if the November election had turned out differently.) You can watch and listen to the readings and our conversation here.  (I mentioned John's blog in our talk, I think; I've learned so much from reading his posts on art, literature, and much more. You can find that here.) 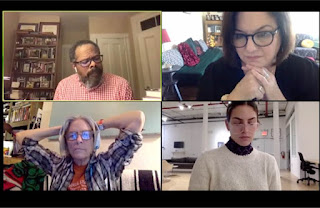 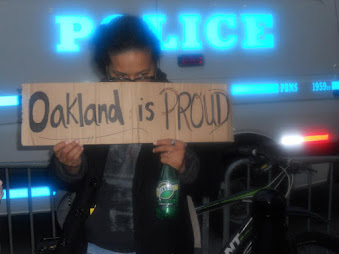 Above: Zuccotti Park, Occupy Wall Street, Manhattan, November 2, 2011 (the day of the Oakland General Strike). I was in NYC for a book party for THE PUBLIC GARDENS. 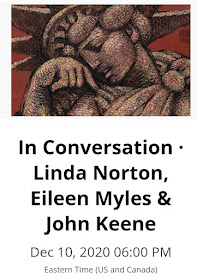 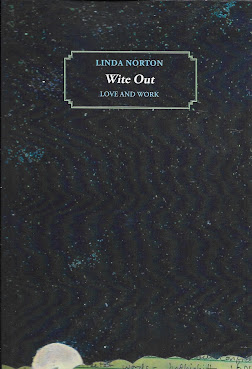 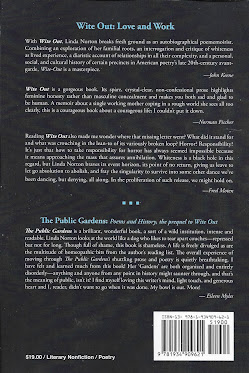 Though this new piece isn't an excerpt from Wite Out, my forthcoming book, it does address some things explored in that book and its prequel, The Public Gardens: Poems and History (2011). #Dorchester Days, #EmmettTill, #JamesBaldwin, #FannyHowe, #BernadetteDevlin, #RoevWade, #BrownvBoard, #TheSoilingofOldGlory, #ToniMorrison, #archives, #notebooks, #collages, #IrishAmericans, #ItalianAmericans, #racism . . . 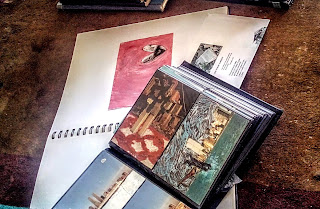 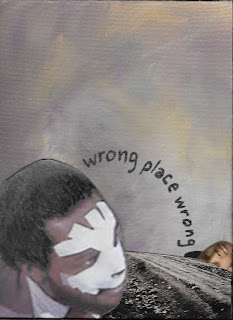 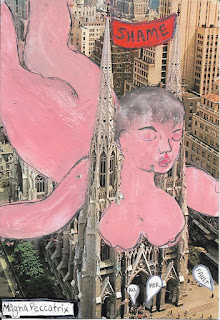 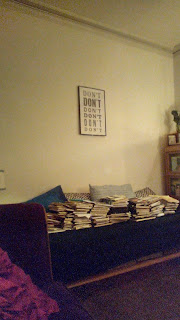 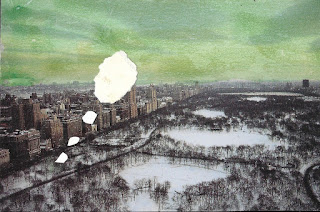 From Old Notebooks
Posted by Linda Norton at 8:25 PM

Does the rain have a mother?
Who made the drops of dew?
Out of whose womb came the ice?
She is hardened against her young ones
As though they were not hers.
The face of the deep is frozen. 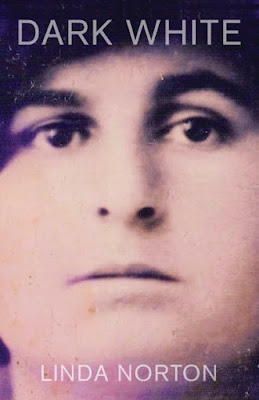 Friends who do not fail us
Mary in our hour of
despair. Take not
away from me the small fires
I burn in the memory of love.
-JOHN WIENERS
The maiden language all over.
-ZORA NEALE HURSTON

My chapbook, DARK WHITE, will be published by Omertà this month. This little book includes the title piece, "Dark White," "Small Square" (ars poetica), "Feminine," "My Mystic," "My Mary,"  "Begin in Blue," "Words Looking for a Street," and "In My Girlish Days" (all of which have been published in little magazines, some of which can be found elsewhere on this blog). "My Mary" is an erasure+ of pages from The Book of Job (from a wet Bible I found in the Lower Ninth Ward in New Orleans, two years after Hurricane Katrina).

I doubt that Omertà ("Omertà, as practiced by the Mafia: A Code of silence about criminal activity and a refusal to give evidence to the authorities") has ever published a book more relevant to its name. Thanks to Les Gottesman for adding my work to a list that includes chapbooks by Joanne Kyger, Diane di Prima, Donna De La Perriere, Denise Newman, and many other writers I admire.

DARK WHITE is a small sampler of work from the full-length memoir with poems, WITE OUT, that Hanging Loose Press will publish in the spring of 2020. I’m extremely grateful to Robert Hershon, Mark Pawlak, Dick Lourie, and Donna Brook for making a home for a manuscript that was orphaned after the death of our friend and my first publisher, Bill Corbett.

You can read it here.

Thanks to Gordon Faylor and Claudia La Rocco
for brilliant collaboration, editing, and design.

"She tells me what happens to fabric when you put it in your mouth (saliva dissolves rayon, but strengthens linen). Says that if you’re cutting and sewing sequined fabric, be sure to wear goggles to protect your eyes. And never set polyester on fire. Once, she says, a customer came into the store and asked for silk orgasma. You can see how that would happen here — this place inspires lust." 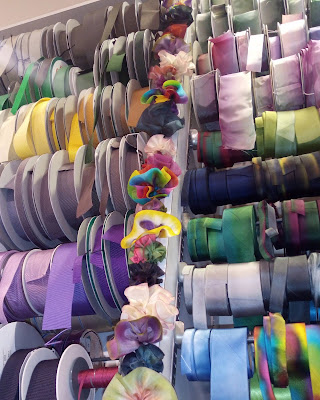 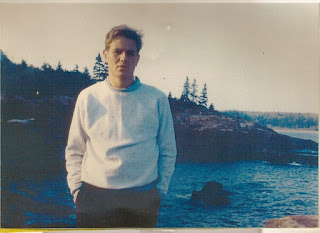 A song of degrees, of pilgrimage, as in the Psalms of David

My brothers all have died,
the boys I held when they were small,
when I was small,
the boys I fed and shoved.

Should I lie down with them and keep them warm
or step over them to live?

Or should I crawl across their bodies in pilgrimage
the way my grandmother climbed the concrete steps to the shrine
on her knees, with me one step behind her at her elbow,
her pocketbook swinging at my face
every time she took a step—

In the parlor of her apartment she had a tapestry of the Roman Colosseum
and a crucifix and a picture of Pope John the 23rd
and houseplants in coffee cans on the windowsills—
marvetta, coleus, basilico.

One year after her death at 92, I went to Rome for the first time.
It was Holy Week and all the stores were closed—chiuso, chiuso, chiuso.
I was six weeks pregnant.
At the Colosseum I kept stumbling over imaginary statuary,
petrified feet and hands in the grass.
Who died here?
I kneeled to vomit in the weeds.
Fata da forta, my grandmother used to say. Make yourself strong.

I walk around the bodies of my brothers,
arranging their limbs, tracing the contours of their faces
I will remember the clean smell of the grass that grew at the Colosseum
and in the cracks in the steps to the shrine
and I will write about it in a book. 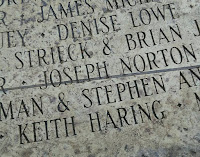 Today, April 7th, is my brother Joseph Norton's birthday. He died of AIDS in New York City on October 2, 1986. He was twenty-four. He would have been 57 if he had lived. It's also Billie Holiday's birthday.

This poem is from my 2011 book, The Public Gardens: Poems and History. In Lent I always think of my grandmother and the crosses she'd weave from palms every year on the Sunday before Easter. And I think of my brother.

@AIDSMemorial kindly reposted my tribute to Joseph today. You may read it here. And you may visit his memorial at the National AIDS Memorial Grove in Golden Gate Park in San Francisco, a beautiful place.